GRAND CAYMAN, CAYMAN ISLANDS / ACCESSWIRE / May 16, 2016 / Oxbridge Re Holdings Limited (OXBR), a provider of reinsurance solutions to property and casualty insurers in the Gulf Coast region of the United States, reported financial results for the first quarter ended March 31, 2016.

Net premiums earned decreased 11% to $1.4 million driven by lower rates on policies in force during the quarter ended March 31, 2016 compared with the previous quarter.

Losses incurred for the quarter ended March 31, 2016 were $63,000 compared with Nil for the previous quarter. The losses incurred were as a result of loss activity occurring under one contract during the quarter, and the resulting establishment of reserves to cover such losses.

Total expenses, including policy acquisition costs, underwriting expenses and general and administrative expenses, were $488,000 compared with $437,000 in the first quarter of 2015. The increase was driven by the establishment of reserves for losses and loss adjustment expenses as per above.

Expense ratio, which measures operating performance, compares policy acquisition costs, other underwriting expenses and general and administrative expenses to net premiums earned. The expense ratio totaled 30.8% during the first quarter of 2016 compared with 28.2% during the first quarter of 2015. The increase is due to the relatively smaller decrease in general and administrative expenses when compared with the decrease in net premiums earned.

"The momentum we established during 2015 resulted in a successful first quarter of 2016," said Oxbridge Re Holdings President and CEO Jay Madhu. "Our prudent underwriting processes resulted in the strong performance of our reinsurance contracts despite an unusually high number of adverse weather events in the Gulf Coast during the quarter."

Subsequent to the quarter end, the company recently declared its regular quarterly cash dividend in the amount of 12 cents. The dividend will be paid on June 30, 2016 to shareholders of record on the close of business June 20, 2016.

Management will host a conference call later today to discuss these financial results, followed by a question and answer session. President and CEO Jay Madhu, and Financial Controller Wrendon Timothy will host the call starting at 4:30 p.m. Eastern time.

The live presentation can be accessed by dialing the number below or by clicking the webcast link available on the Investor Information section of the company's website at www.oxbridgere.com.

Please call the conference telephone number 10 minutes before the start time. An operator will register your name and organization. If you have any difficulty connecting with the conference call, please contact Precision IR at 919-481-4000 or operations@issuerdirect.com.

A replay of the call will be available by telephone after 8:00 p.m. Eastern time on the same day of the call and via the Investor Information section of Oxbridge's website at www.oxbridgere.com until June 16, 2016.

About Oxbridge Re Holdings Limited

Oxbridge Re (www.oxbridgere.com) is a Cayman Islands exempted company that was organized in April 2013 to provide reinsurance business solutions primarily to property and casualty insurers in the Gulf Coast region of the United States. Through Oxbridge's licensed reinsurance subsidiary, Oxbridge Reinsurance Limited, it writes fully collateralized policies to cover property losses from specified catastrophes. Oxbridge Re specializes in underwriting medium frequency, high severity risks, where it believes sufficient data exists to analyze effectively the risk/return profile of reinsurance contracts. The company's ordinary shares and warrants trade on the NASDAQ Capital Market under the symbols "OXBR" and "OXBRW," and the company's common stock is included in the Russell Microcap Index. 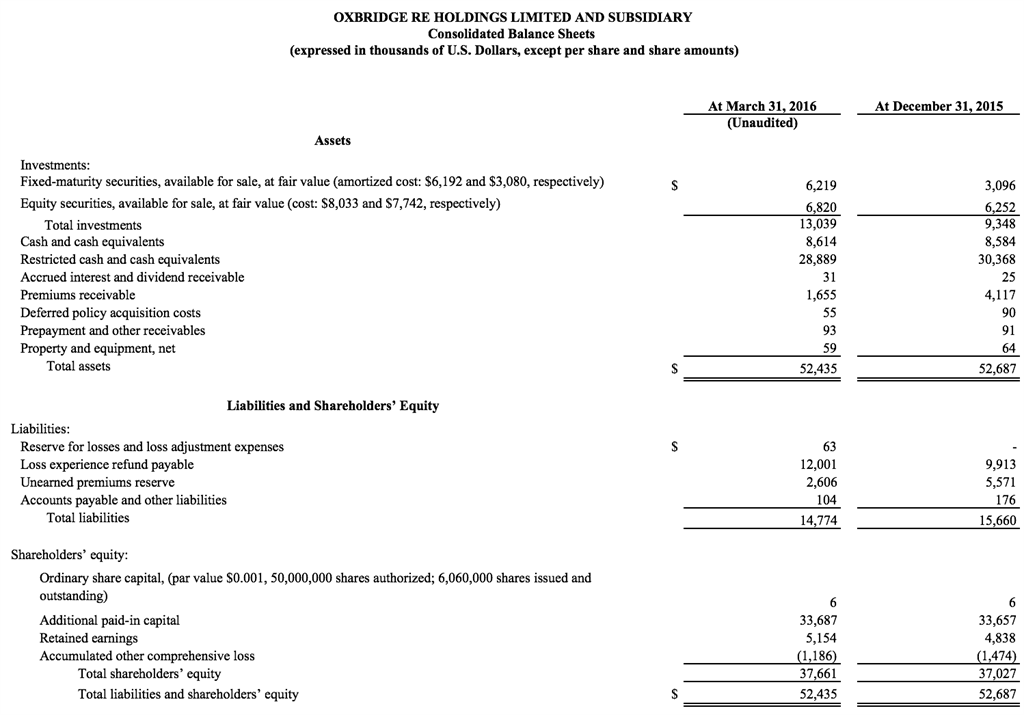 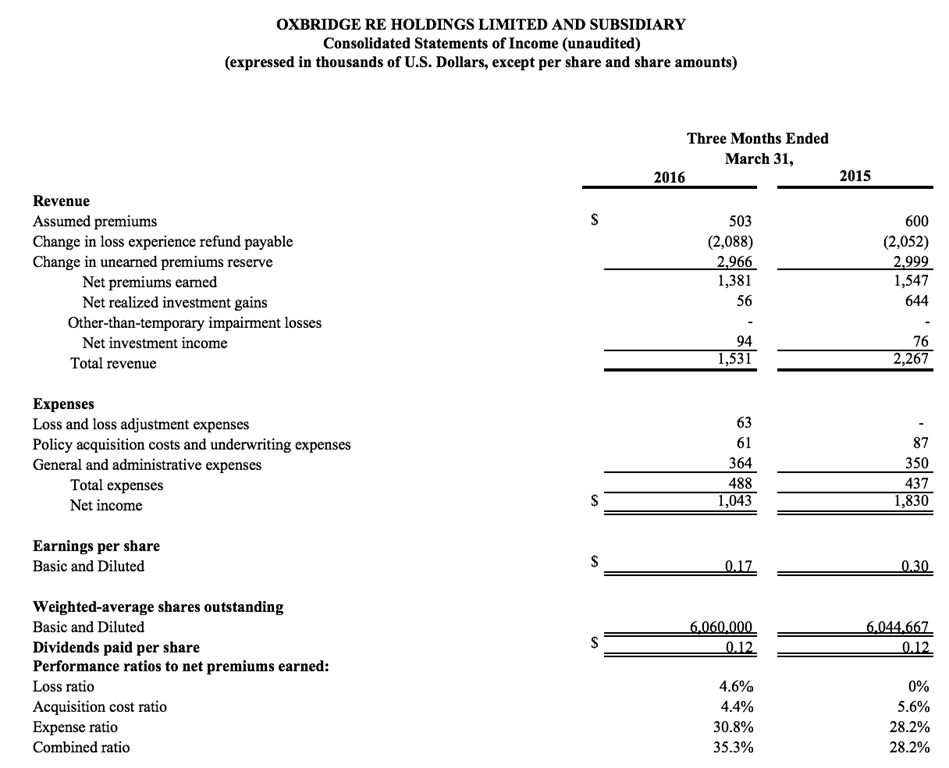